The POW Canada Science Alliance is a committee of research and thought leaders on climate change in Canada. They help to guide our work and ensure we share accurate information in practical and straight forward ways. 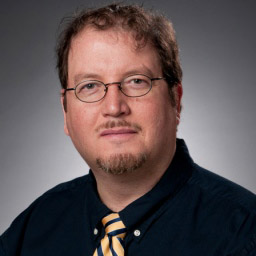 Dr. Fenech has worked extensively in climate change since 1988, including as a member of the United Nation’s Intergovernmental Panel on Climate Change, which was awarded the 2007 Nobel Peace Prize. He has edited seven books on climate change over the past seven years, most recently as editor of the international journal on Climate Impacts and Adaptation Science.

Dr. Fenech has taught at the University of Toronto since 1998, and lectures regularly at universities across Canada and around the world. He joined the University of Prince Edward Island as Director of the Climate Research Unit. 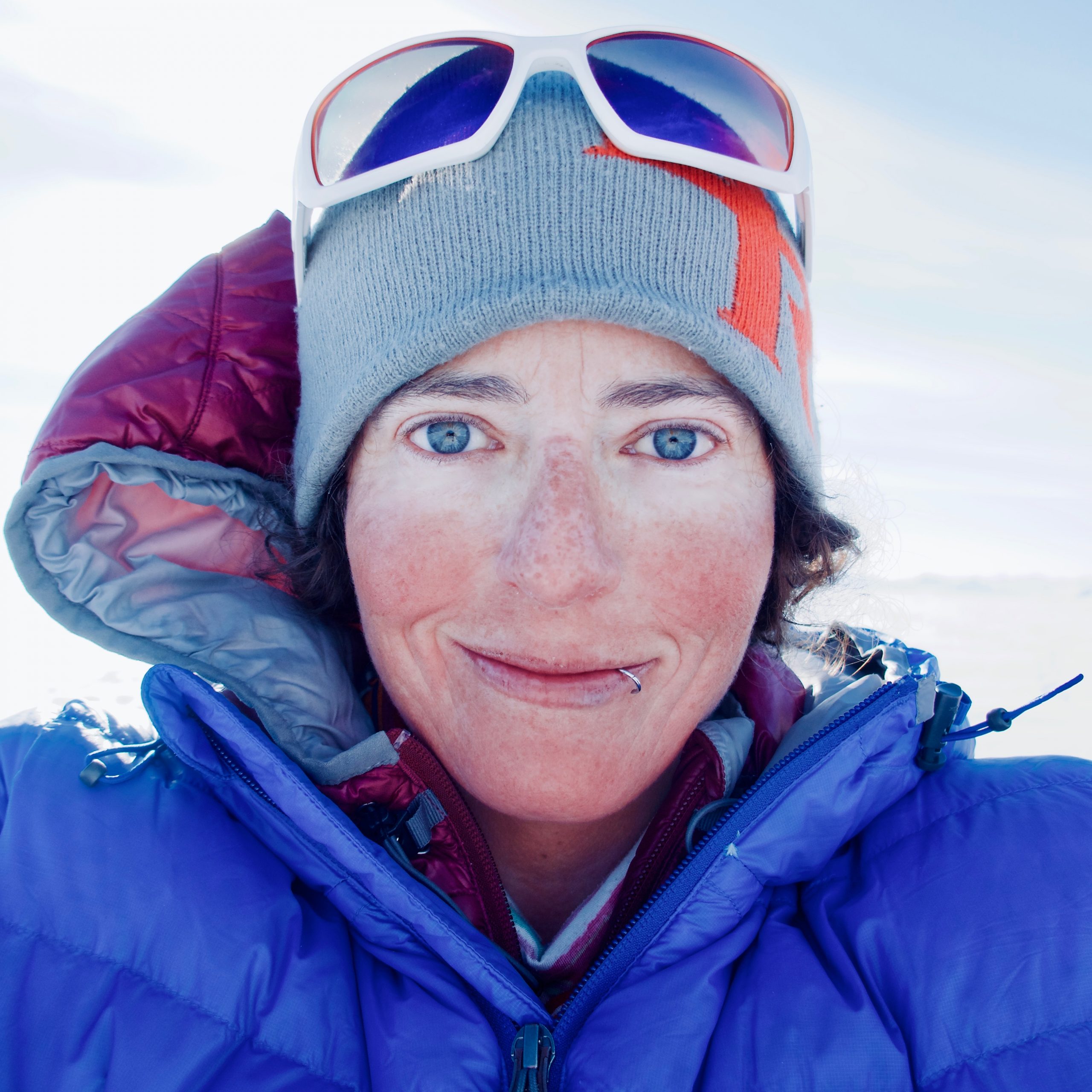 Dr. Alison Criscitiello is an ice core scientist, and high-altitude mountaineer. Criscitiello’s research explores the history of sea ice in polar regions using ice core chemistry, which involves long months of living in a tent and drilling ice cores in places like Antarctica, Alaska, the Canadian high Arctic, and Greenland. She is the Director of the Canadian Ice Core Lab (CICL) at University of Alberta, and an Adjunct Assistant Professor at the University of Calgary. Criscitiello holds a BA in Earth and Environmental Science from Wesleyan University, an MA in Geophysics from Columbia University, and the first PhD in Glaciology ever conferred by MIT. When not busy shivering for science, Criscitiello seeks out the cold for fun, whether working as a climbing ranger in the national parks or guiding expeditions to major peaks in the Andes, Alaska, and the Himalaya. In 2010, she led the first all-women’s ascent of Lingsarmo (6955m) in the Indian Himalaya. She has been the recipient of three American Alpine Club (AAC) climbing awards including one for Borderski, her 2-month winter ski traverse of Tajikistan’s border in the eastern Pamirs with two other Canadian women. In 2016 she was awarded the Mugs Stump Award and John Lauchlan Award to attempt a first alpine ascent in the Indian Himalaya. Alison has been named a National Geographic Explorer, and a Fellow of the Explorers Club and the Royal Canadian Geographical Society. Criscitiello is founder and co-director of Girls on Ice Canada. 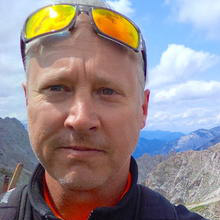 Dr. Daniel Scott is a professor in the Department of Geography and Environmental Management at the University of Waterloo, a University Research Chair, as well as the Executive Director of the Interdisciplinary Centre on Climate Change. He has worked extensively in the areas of climate change, global tourism, and protected area management. He has collaborated with the United Nations World Tourism Organization, United Nations Environment Programme, the World Meteorological Organization, and several development organizations. Dr. Scott has been a contributing author and expert reviewer for the Intergovernmental Panel on Climate Change’s Third, Fourth, and Fifth Assessment Reports. 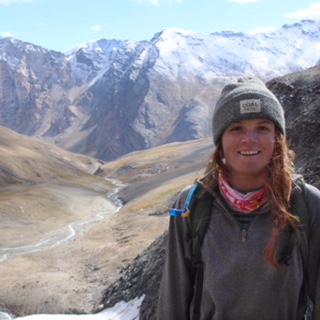 Nat Knowles is a climate scientist, wilderness conservationist, and outdoor athlete. Her research focuses on mitigating climate change, managing its inevitable impacts, and using outdoor recreation and tourism for sustainable socio-economic development. She completed a Master of Science on these topics at the University of Oxford and is now a PhD candidate at the University of Waterloo. While currently an avid backcountry adventurer, as a former alpine ski racer she won two NCAA National Championships with the University of Denver, and represented Canada at the World Junior Championships and the World University Games. 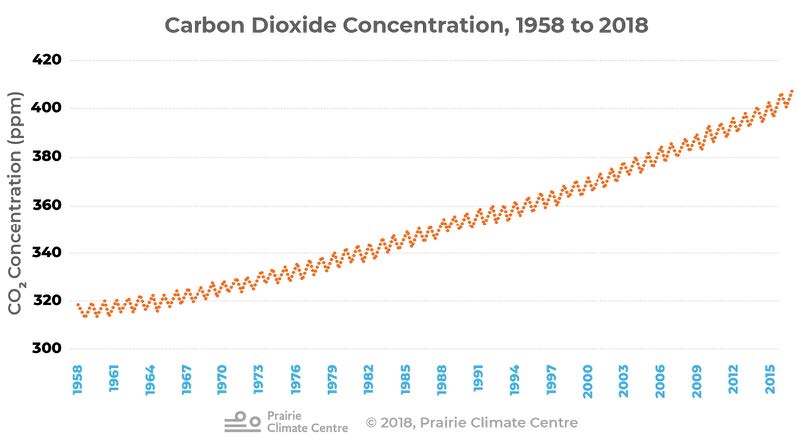 Over the past 800,000 years, carbon dioxide (CO2) and surface temperatures on Earth have had natural variability yet still remained at patterned and reliable levels. Now, mostly due to large-scale human fossil fuel use, atmospheric CO2 levels have surpassed historic levels, exceeding 400 parts per million (ppm). Because CO2 levels and temperature correlate, our world is already measurably warmer, and that is escalating global hurricanes, floods, heat waves, droughts, coral bleaching, ocean acidification, and forest fires. The climate situation is bad now – people and the planet are already getting hurt. Unless we get CO2 concentrations back below 350ppm soon, things are going to get a lot worse.

Weather is short-term. Think: how might the temperature, humidity, precipitation, clouds, visibility, and wind change in the next hour, day, or week?

Climate is long-term. Climate is the weather in a certain area averaged over a long period of time (30+ years), in which we can observe large-scale trends and changes. 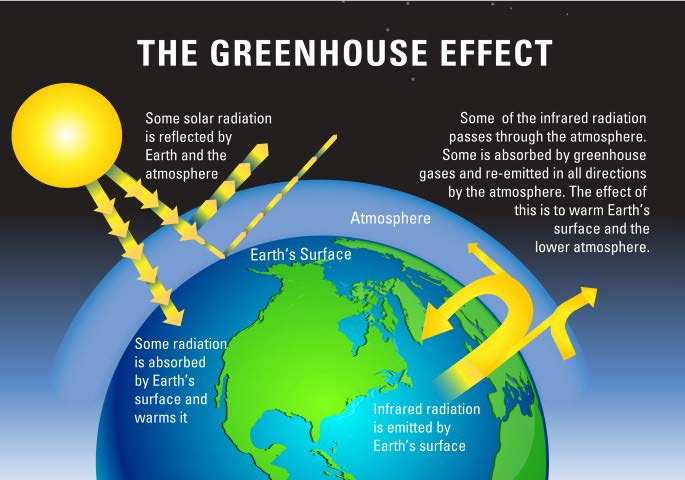 Greenhouse Effect traps heat in our atmosphere. Certain gases in our Earth’s atmosphere, including carbon dioxide, water vapour, methane, ozone, and nitrous oxide among others, allow sunlight to pass through but stop that heat from escaping back out to space. Without greenhouse gases, our planet would be substantially colder and would not support the ecosystems we know today. But too much greenhouse gas in our atmosphere traps too much heat.

Fossil Fuels form when organic carbon from ancient plants and animals is buried, heated, and compressed under high pressures over hundreds of millions of years in Earth’s crust. Burning fossil fuels releases the stored carbon back into the atmosphere as carbon dioxide. This increases the concentration of greenhouse gases in our atmosphere to more than we need. 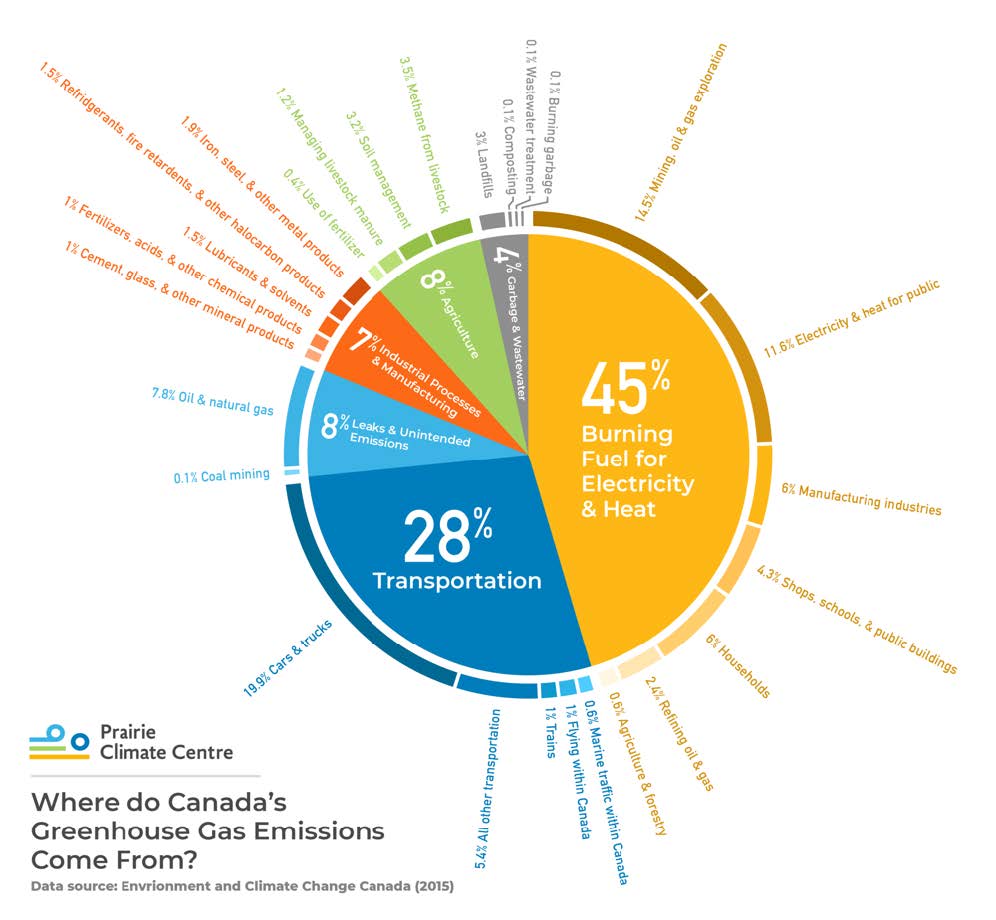 We are Causing Climate Change

More than 97% of scientists agree that since the industrial revolution the earth has been warming at an unprecedented rate. Scientific research proves this warming is due to increases in greenhouse gas emissions primarily caused by human activities.

Human caused green house gases are emitted from burning fossil fuels for electricity, heating, transportation and other activities. While fossil fuels have been helpful in global development for hundreds of years, it is now evident that the resulting emissions are a major problem.

If Left Unchecked, The Impacts Will Be Serious

Snow and ice are intrinsic to Canada, but winter is changing. For instance climate model project that under high emission scenarios, western Canada could lose up to 95% of glacier volume by the end of the century (Radic et al., 2014). Warming temperatures mean lower snowpack, higher snow line, and melting glaciers, permafrost and arctic ice. Local conditions may vary, but the trend is clear; ski seasons are becoming shorter, more extreme and less reliable.

Beyond winter sports, reduced snow and ice can significantly impact the Canadian landscape as we know it. Many native species and communities used to living in winter environments will have to adapt. Canada’s plentiful freshwater will be at risk since much if it comes from glaciers and spring snowmelt. Transportation across Northern Canada will become more difficult as permafrost warms and ice breaks up. Melting of Canada’s glaciers and ice caps will be the third biggest contribution to sea level rise, behind Greenland 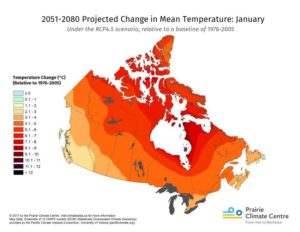 Furthermore, a warming climate means increases in forest fires and invasive species such as mountain pine beetle will reshape our forests and wildlife. Heatwaves, diseases, and smog will endanger our health. Drought, flooding, or severe storms will impact our farmers, forests, and many other important industries.

“It’s not climate change, its everything change” – Margaret Atwood

Check out what a future with climate change looks like in your municipality!

Climate change will have large impacts on all aspects of life throughout the world. The UN Intergovernmental Panel on Climate Change (IPCC)’s latest report demonstrates that without urgent action there is an increasing threat of “severe, pervasive and irreversible impacts for people and ecosystems”. Increasing hurricanes, tornados and extreme weather events will harm humans and infrastructure. Heat waves and drought will jeopardize global food production. Wildlife and biodiversity both on land and in our oceans will have to adapt to new environments or face extinction. These impacts also pose incalculable economic risks.

With the future of snow and more at risk, We Must Take Action Now: Scientists warn that to mitigate the most severe impacts we must keep global surface temperature change under 2 degrees C and bring CO2 levels back below 350 ppm.

Embracing renewable energy sources to address global climate change will drive innovation, create long term jobs, and improve our health and air quality. The clean technologies we need to get started already exist, we just need to put policies in place that prioritize them.

What can you do right now?

Learn more.
Explore some of these websites:

Get involved.
Become a member of POW Canada and add your voice to our grassroots movement. Tell others about us – there’s power in numbers.

Change your habits.
Calculate your own carbon footprint and challenge yourself to reduce it annually.

Lead others to do the same.
Teach your family, friends and peers about climate science and get them involved in the solutions.